dJAX Adserver for Joomla is Ad server package used for the Joomla website owners or Agencies who have their publishers using joomla can easily install and integrate plugin into their current CMS platform that plays an imperative part in delivering ads using our extension module. Simply create the module of your choice where you would like display banners to appear on your website page using our extension module for the selected AdZone. dJAX adserver is to manage or deliver different type of ads on their websites effectively and based on various targeting functionality so there is an increased more attraction on advertiser products. 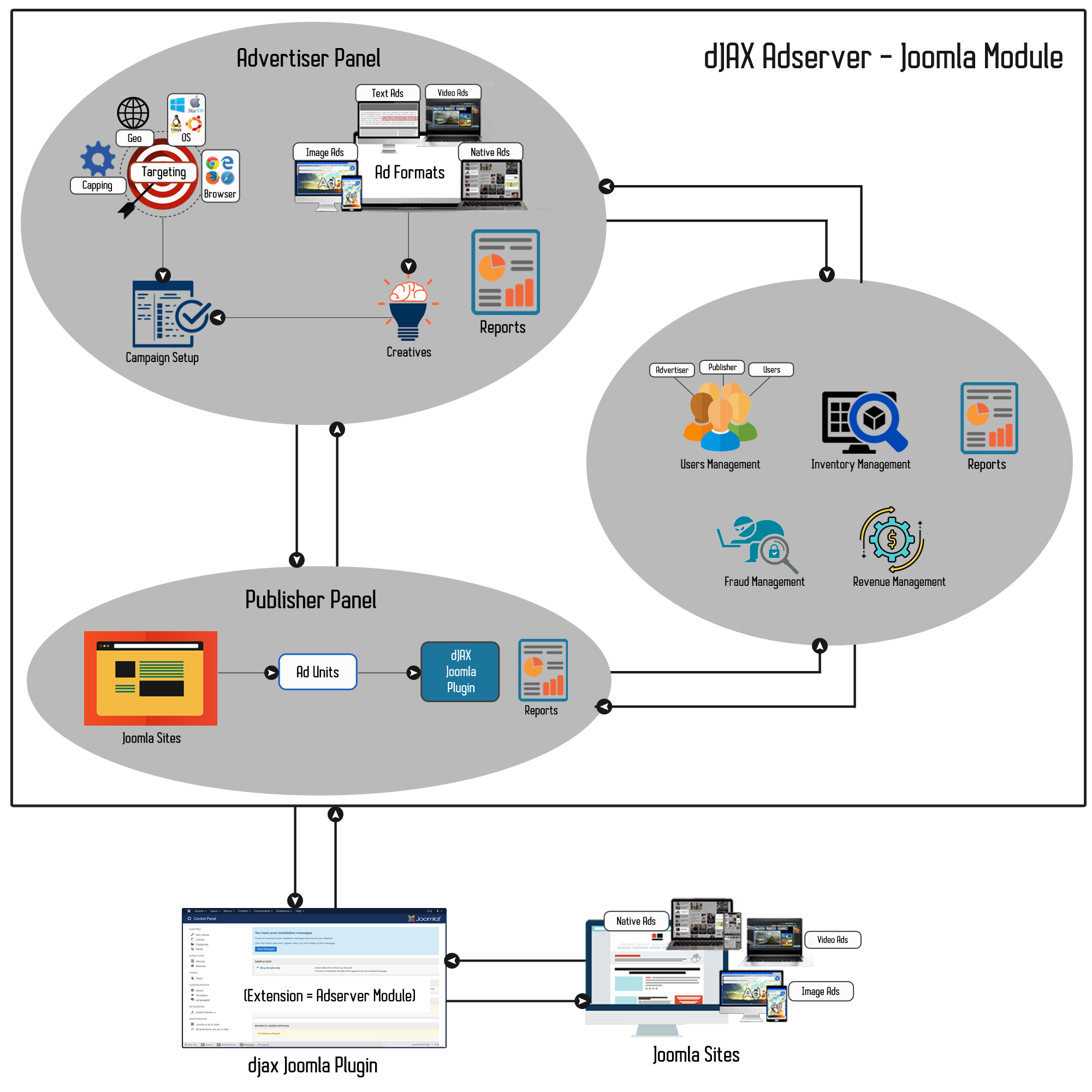 The platform provides the report on the amount shared by admin to publisher, the amount spent by advertiser, admin revenue, and publisher income. The invoice is generated periodically for publisher earnings.

This system analyses all possible fraud clicks and will save your time and money. You can customize it based on your requirement and it will act accordingly to detect the frauds and make you run the business independently without any hassles.

The security management system prevents the fraudulent clicks made by hackers or anonymous and protects the publisher website and avoids unnecessary payment of advertiser. The user can customize the option to detect the fraud clicks.

Flexibility to support different sizes of ad units; It lets you to create your own personalized banners for your campaigns; this makes the creative to fit perfectly to the ad space in the publisher website.

It supports PayPal payment for the advertisers to purchase the inventory and so your Advertisers can instantly make payments and start advertising.

An ideal ad format for the evolving digital age where the number of display devices used is growing at a rapid pace. This format targets all the display devices and can deliver audience engaging ads that can attract attention without disrupting the user experience.

Engaging Ad format without disturbing the user in any way. Banners, images with text, digital billboard ads and much more to gather audience attention.
Clear precise text that delivers advertisers context to audience directly. Direct message to the user about offers, rewards and freebies.

Mobile ad formats are the best way to reach audience at the present technological landscape. Mobile device users are increasing every day and the ability to reach mobile users with an appropriate ad can make a huge difference to the adtech industry. Engaging formats with clear intention of reaching out to the user.

The ‘IAB rising stars ad formats provides eight popular ad units which are suitable for all ad serving needs.
New features to improve the user’s ad experience. The new MRAID enables the ad to measure viewability and audibility, detect MRAID environment, and get location data to present user with the best possible experience.
Engaging Ad format without disturbing the user in any way. Banners, images with text, digital billboard ads and much more to gather audience attention.
Clear precise text that delivers advertisers context to audience directly. Direct message to the user about offers, rewards and freebies.

The video ad formats are VAST Compliant and delivered through player that support the delivery such as JW player, HTML player and Flow player

Linear video ads are the ads, typically in video format that interrupt streaming video content much like a TV commercial. They can play before pre-roll), during (mid-roll), or after (post-roll) the streaming content. Also, companion Ads are served with Linear or Nonlinear ads, but are displayed outside the video player. They can serve as a leave-behind on the page after the video ad has ended and enables an engaging experience to the user. Linear ad formats can be accompanied by a companion ad, or they can include an interactive component.
This type of video ads runs simultaneously with the video content, usually in the form of an interactive banner ad in an overlay. Companion Ad are linear or non-linear ads which is commonly displayed as a standard banner or rich media ad, but can also be a skin that wraps the video ad experience. Clicking on these ads generally pauses the content and either a full player ad is shown or the user is taken to an advertiser’s website. The Ad duration can be configured as per requirement.
Provides interactions between ad units and video players. VPAID focus on providing a rich and interactive in-stream ad experience. The user interaction data get reported on the viewed ad.
Supported versions: VPAID 1 VPAID 2
Digital Video Multiple Ad Playlist enables video content owners to have control over the ad inventory displayed with their content. VMAP allows the content owner to define the ad breaks within their content that includes the time for each break, number of breaks available, the type of ads and the number of ads allowed in each break
Ad Pods is a set of sequential linear ads that are played before, during and after the original video content. The video ad pots function like a TV commercial break with multiple ad spots.

Native advertising is a division of content marketing where the posted advertisement will match exactly with the editorial content published in the website. There are various types of native ads available for the users; they can choose their desired type as per the business requirement.

The in-feed advertising is divided into two types they are sponsored/content ads and in-feed promotional ads. The sponsored/content ads will reflect the content available in the feeds. The in-feed promotional ads will appear in-stream and it redirects the audience to advertiser’s website, examples for in-feed promotional ads are popular blogs and websites.
On most blogs/ websites at some parts every article if you encounter a widget with a heading like ‘You may also like’ or 'Recommended for you’, this is what a recommendation widget is. These are nothing but sponsored recommendations; a paid content discovery links distributed by content amplification networks. For publishers who wish to increase their audience or for marketers that are using content marketing for lead generation, recommendation widgets would benefit them immensely
This ad content is marked as sponsored and show-up in websites in a similar format as all other content from the publication. Most common type of creative used are image and video ads. These ads are written either by the publisher or in conjunction with the sponsoring advertiser.

Ads are delivered based on the visitors operating system in both Desktop and Mobile Environment.

The ads are delivered to targeted countries & city

The advertiser can define the impression count per hour.

The advertiser can deliver the ads to selected mobile manufactures.

Ads are delivered based on the visitors browser in both Desktop and Mobile Environment.

The advertiser can deliver the ads to selected telecom operators like Airtel, Vodafone, Jio users

Benefits of the Plugin

Make the most of advertising on web pages, easily and efficiently.

Get accurate and instant statistics of campaign based on geography, environment, websites, and ad engagement. Use our clear insights and explicit values to know the performance of your video ads, also includes a bunch of sorting options.